Spending on health accounted for around 18% of all public spending in the UK in 2013–14 and 32% of spending on public services. To date, overall departmental spending has seen large cuts as part of the government’s fiscal consolidation (9.7% in real terms between 2010–11 and 2015–16 (see Public Spending). The National Health Service (NHS), however, has been relatively protected from such cuts under the coalition government. The period beyond 2015–16 looks set to be one of continued austerity for departmental spending. The next government will therefore continue to face difficult decisions over how to allocate future spending between departments.

Figure 1: UK health spending over time [get the data for this graph] 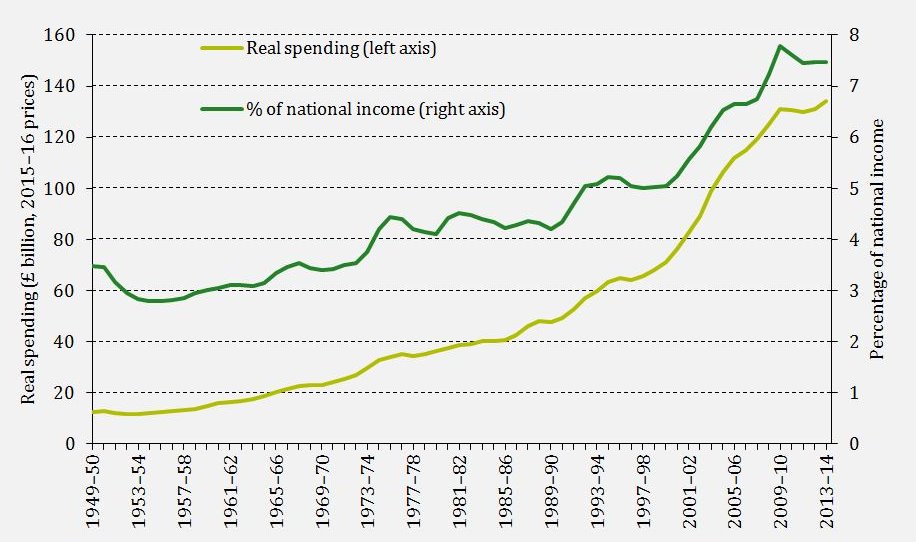 In England spending on the NHS is the responsibility of the Department of Health (DH). The DH budget is forecast to increase by 6.7% in real terms between 2010–11 and 2015–16, equivalent to around 1.3% per year. This is considerably greater growth than for most other departments over this period (the average change in departmental spending excluding the DH is a cut of 15.7% over the five years), but is lower than the average growth in UK health spending in the past.

The NHS does face pressures on its budget over and above those posed by the general increase in prices. A 0.7% per year increase in spending would be required just to keep real spending per person constant between 2010–11 and 2019–20 given projected population growth. The population is also ageing. Since older individuals on average consume more, and more expensive, healthcare, this will also tend to increase demands on the health service. In the Green Budget we estimated that a 1.2% per year increase in real spending could be needed to keep pace with both the changing size and the changing composition of the population. Demand will also increase over time as a result of the rising prevalence of some chronic conditions, improvements in access to care, and improvements in technology combined with government policy increasing the range of healthcare treatments available through the NHS. Furthermore, the NHS typically faces pressure from rising costs – in particular from wage pressures and high-cost drugs.

NHS England recently estimated that the NHS faces financial pressure from increased demand and rising costs that amount to around 3.5% per year in real terms between 2013–14 and 2020–21 (similar estimates have also been produced by organisations such as the Nuffield Trust and the Health Foundation). To meet these pressures without reducing quality would require increases in real funding, increases in productivity or both.

Figure 2: Trade-off between spending on the Department of Health and other departments between 2015–16 and 2019–20 under the 2015 Budget plans for total spending [get the data for this graph]

The next government is likely to change the level of spending planned for the years after 2015–16 relative to what was set out in the Budget; the fiscal rules set out by the Conservatives, Labour and the Liberal Democrats would allow each of them to reduce the scale of departmental spending cuts relative to current plans. This would ease somewhat the trade-off described in Figure 2, but comes at the cost of higher borrowing, higher debt and higher debt interest spending. The next government therefore faces difficult decisions over the appropriate balance between the level of public and private financing of the NHS and between levels of borrowing, taxation, public spending on the NHS and other public spending. 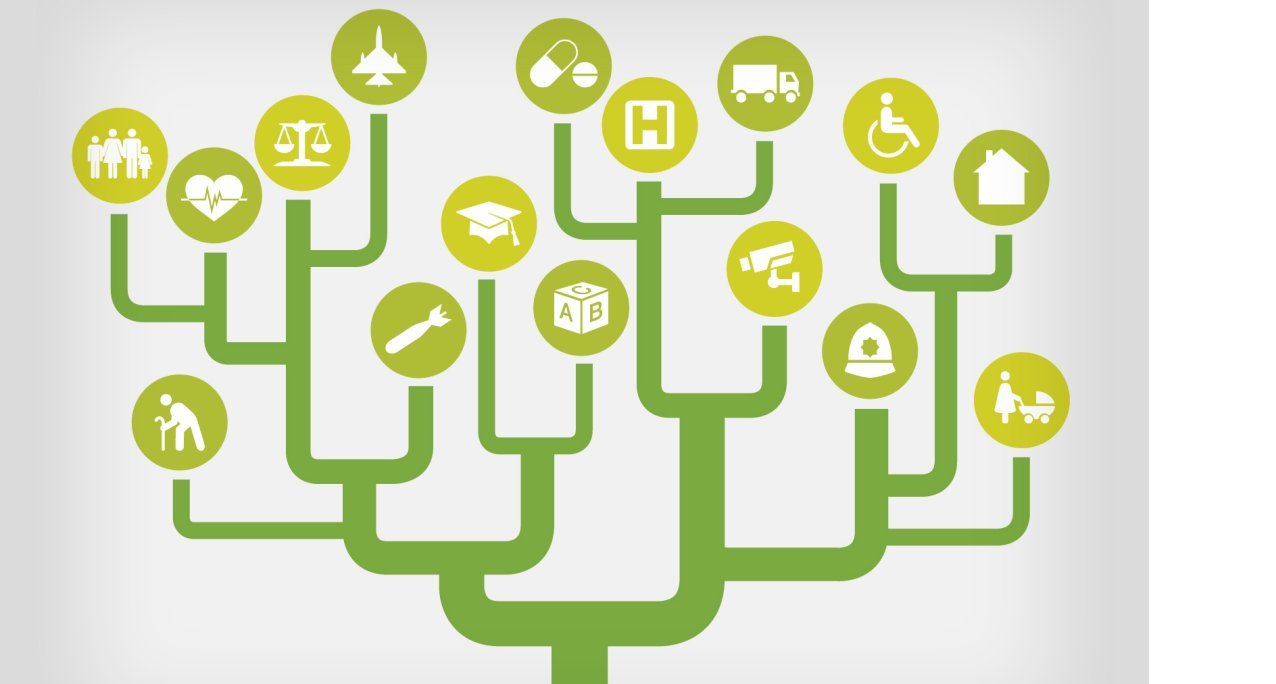 An article by IFS researchers, commissioned and published by The Lancet, considers the rising demand and cost pressures for the NHS and how these might be addressed under the parties’ plans for public spending over the next few years.

An article, commissioned and published by The Lancet, considers the rising demand and cost pressures for the NHS and how these might be addressed under the parties’ plans for public spending over the next few years.

This Green Budget chapter estimates that a 1.2% per year increase in real spending could be needed to keep pace with both the changing size and the changing composition of the population.