In 2010 the coalition published a ‘corporate tax road map’ setting out the aim to create ‘the most competitive corporate tax regime in the G20’. The key policy changes that followed have been a reduction in the main corporate tax rate from 28% to 21%, with a further cut to 20% planned for April 2015, the introduction of a Patent Box and reforms to the taxation of foreign income. The Patent Box was initially announced under the previous Labour government and the reforms to foreign income taxation followed from the move to an exemption of foreign source dividends in 2009. The Coalition government has also made changes to the tax base. Notably, capital allowances for plant and machinery were reduced in 2012 and, in a demonstration of how not to design the tax system, the Annual Investment Allowance has been decreased and then increased twice for a temporary period. The cost of cuts to the main rate is around £7.6bn a year. Other onshore corporation tax changes are roughly revenue neutral.

The ranking of the UK’s headline tax rate has improved since 2010 and the rate is now one of the lowest in the G20 (see Figure 1). However, this is matched with a broad tax base that is internationally uncompetitive. That is, the UK offers less generous capital allowances than almost all other OECD countries. As a result, the overall system is less competitive than the headline rate suggests, especially for companies that earn relatively low profits but undertake significant investments. The Patent Box makes the UK a more attractive destination for some types of investments, but the UK is now one of 12 European governments to offer such a policy and it is not clear what benefits will result. Recent work by IFS researchers discusses issues around Patent Boxes, which are currently being investigated by the by the EU’s Code of Conduct group. 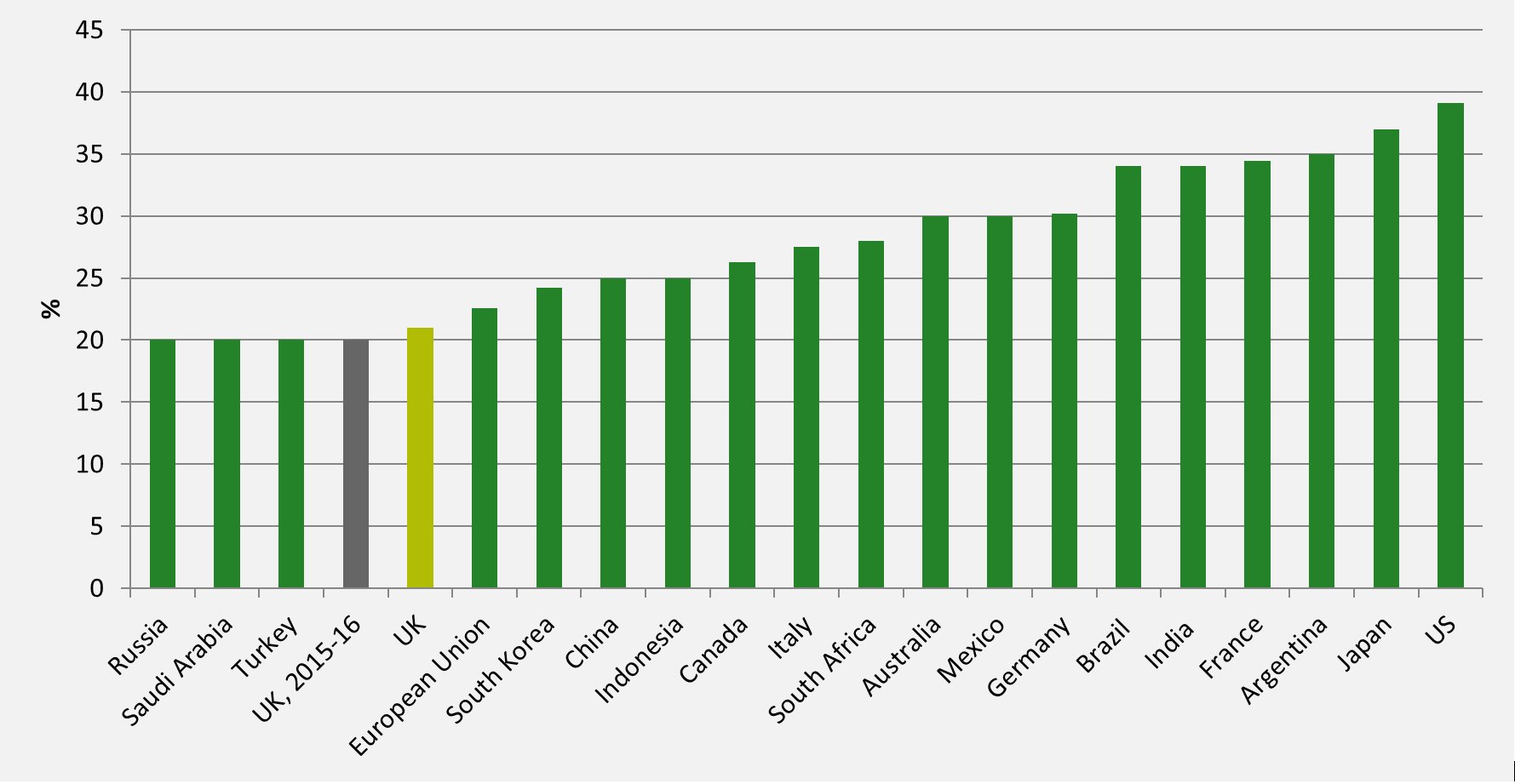 Notes: Measure refers to the combined corporate income tax rate, which includes local taxes where relevant. The value for the European Union is an unweighted average across EU countries.

In 2013–14 corporation tax net receipts were £39.3 billion, which amounts to 6.6% of total receipts and 2.3% of national income (see Figure 2). Receipts, and especially those from the financial sector, have fallen sharply since the recession, having peaked at £48.0 billion in 2007-08. The latest OBR projections (March 2015) suggest that revenues will continue to fall as a proportion of GDP across the forecast period.

Figure 2. Receipts from corporation tax and business rates [get the data for this graph] 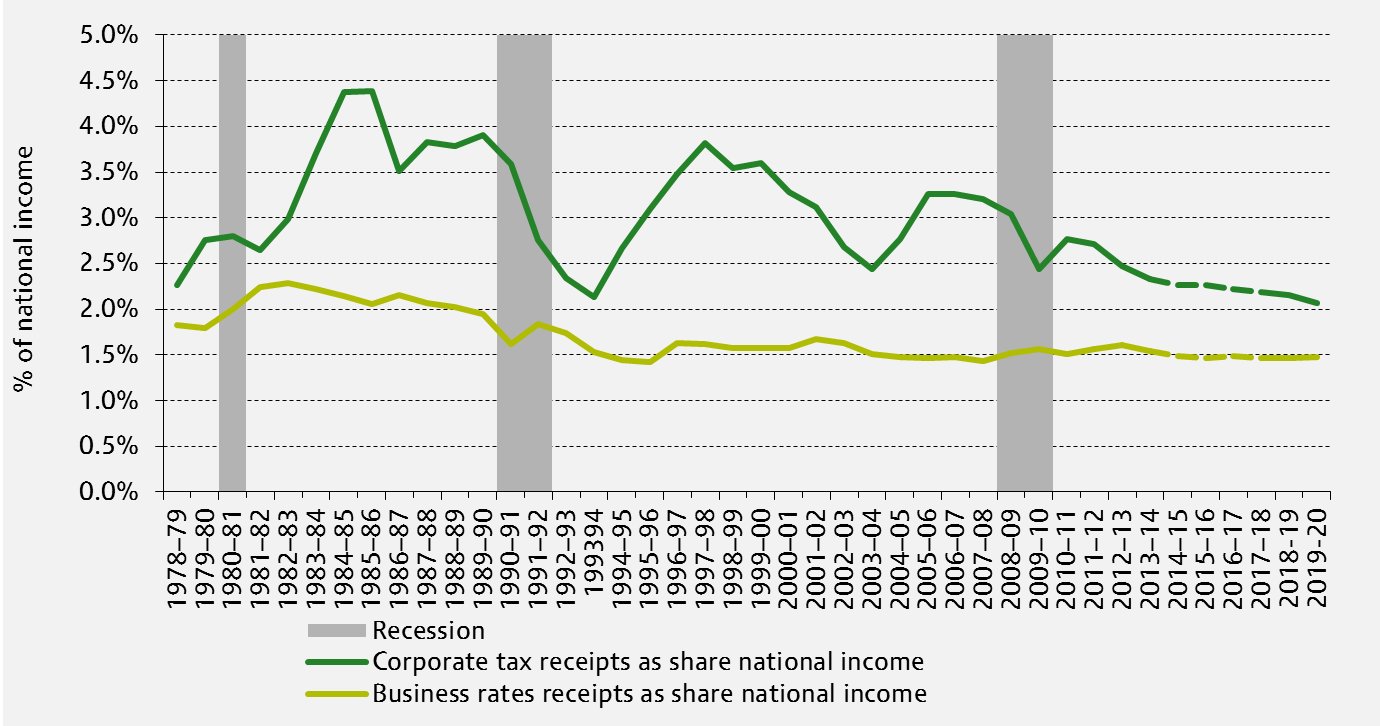 Over a longer period though, and notwithstanding significant volatility, the share of corporate tax receipts in national income showed no obvious downward trend in the period from the 1980s to 2008. This was despite the fact that the main rate of corporation tax more than halved (from over 50% to 28%) over that period and in contrast to long running concerns that corporate tax revenues will decline as the income from corporate activities becomes more mobile.

In recent years there has been concern about tax avoidance by multinationals and the effects that this may be having on revenues. The 2013 Green Budget analysis contains a discussion of revenues and avoidance. The UK is currently engaged in the OECD Base Erosion and Profit Shifting (BEPS) project, which aims to promote international cooperation in reducing avoidance and is due to conclude by the end of 2015.

In the June 2010 Budget, the Chancellor announced the introduction of the bank levy– a tax on certain equity and liabilities of banks and building societies. One of the stated aims was to ‘ensure that the banking sector makes a fair contribution...reflecting the risks it poses to the financial system and the wider economy.’ The government has announced increases to the bank levy rate on eight occasions in the last four years. The March 2015 OBR forecast suggests that the levy will raise £2.8 billion in 2014-15 and £3.6 billion in 2015-16. The government had previously announced that it saw £2.9 billion each year as a reasonable revenue target. After the increase in the rate in Budget 2015 to 0.21%, the levy is expected to raise significantly more than that from 2015–16 onwards.

The other large tax collected from businesses is business rates, which is levied on the estimated market rental value of most non-residential properties. In 2013-14, business rates raised £26.8 billion, which represents 4.4% of total revenue. Across the forecast period, revenues are predicted to be relatively flat as a share of national income (see Figure 2).

The recent policy moves, as well as possible alternative reforms, are discussed in this chapter of the 2014 Green Budget analysis.

For a discussion of trends in corporate tax revenues, issues around avoidance, and the taxation of North Sea oil and gas see Chapter 10 of the 2013 Green Budget.

Recent policy changes, including the possibility of devolving corporate tax to Northern Ireland are discussed in Chapter 10 of the 2012 Green Budget

An overview of recent developments in business taxation can be found in chapter VI of this paper.

A discussion of recent changes to Business Rates and options for reform can be found in chapter 11 of the 2014 Green Budget.

In the run up to the election we will publish an analysis of the business policies in parties’ manifestos.

Corporate tax has rarely received as much attention, either from policy makers or the public, as in recent years.  The latest IFS observation relates to a new election briefing note published today as part of the IFS election 2015 analysis, funded by the Nuffield Foundation.

Today's election briefing note reviews changes in corporation tax policy implemented by the coalition government since 2010 and and assesses where this leaves the UK regime in an international context.

This presentation was given after the Autumn Statement 2014. A video of the presentation and the slides are available.

Chapter 10 of the IFS Green Budget 2013 discussed trends in corporate tax revenues, issues around avoidance, and the taxation of North Sea oil and gas.