Over the last 15 years, policy-makers in the UK have devoted increasing attention to early childhood education and care (ECEC). From lagging well behind most European countries in the early 1990s, the UK is now one of the highest spenders on pre-primary services in Europe, with public expenditures on childcare and early education services for pre-school children estimated to range between 0.5 and 0.9% of GDP (OECD, 2014; Stewart, 2013).

Figure 1. Spending on the main sources of childcare support in the UK over time [get the data for this graph] 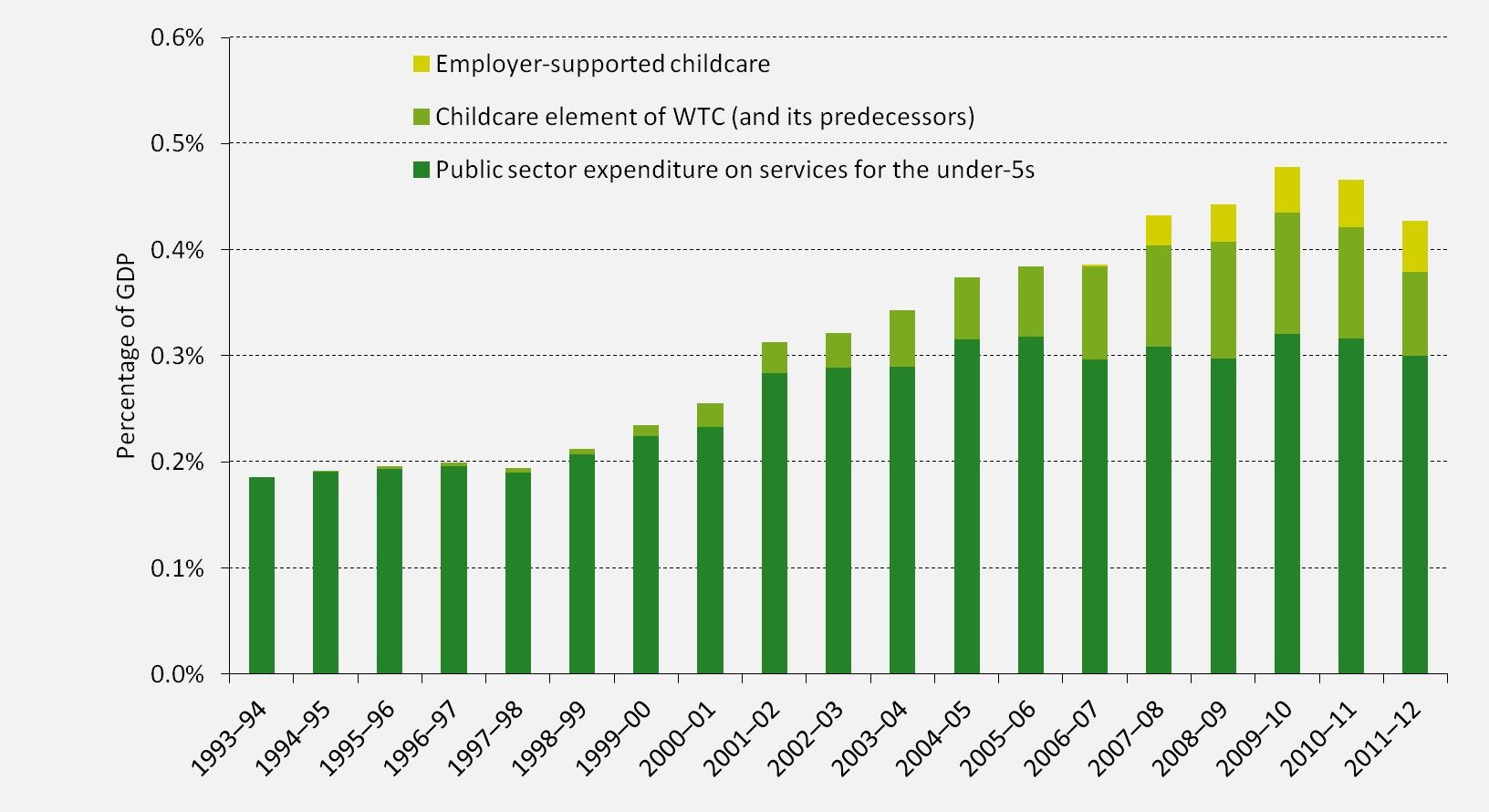 The figure above shows that government spending on these three main programmes grew substantially over the past 15 years. While the expansion started under the Labour government of the previous decade, the current coalition government has enacted reforms and announced further ones that will strengthen all three forms of support for ECEC.

From September 2015, the government will introduce a new scheme providing tax-free childcare for working families, which should gradually replace the employer-supported childcare vouchers scheme. Through this system, the government will ‘top up’ payments made by parents at a rate of 20p for every 80p that families pay in, subject to an annual limit of a £1,200 contribution from the government for each child.  Families will be eligible for the scheme if all parents are in paid work and they do not receive support for childcare costs through tax credits or universal credit.

The government has long subsidised formal childcare for low- to middle-income working parents through in-work benefits or tax credits, and this is set to continue with the introduction of Universal Credit. In particular, parents will be able to claim back 70% of their spending on formal childcare. Compared with its predecessor - the childcare element of the Working Tax Credit - the new system will be more generous for families where parents are working fewer than 16 hours a week (which are currently not eligible at all for childcare support through tax credits) but less generous for working parents also receiving housing benefit. There will also be a higher subsidy rate of 85% applying to families where both parents pay income tax (expected to benefit about 200,000 families), in order to compensate these families for being ineligible for the new tax-free childcare scheme.

The third way the government has been supporting families with the costs of childcare is by providing a free, part-time nursery place. This policy has applied to all four-year-olds since 1998 and to all three-year-olds since 2004. In 2012, the Coalition government announced it was to gradually extend the policy to two year-olds. In September 2013, the free entitlement was extended to cover the 20% most disadvantaged two year-olds and in September 2014 it was extended to cover the 40% most disadvantaged ones.

The aims of ECEC policy in the UK have not always been clearly defined. However, there is a growing sense that ECEC policy should serve the twin goals of improving children’s outcomes and promoting parental, especially maternal, employment. Until recently, however, little evidence was available on the impact of the government's early years policies on either outcome. Recent analysis conducted by researchers at the IFS and the Institute for Social and Economic Research (ISER) has started filling this gap by investigating the impact of the free entitlement for three year olds on maternal labour supply. A companion project conducted by researchers at ISER and University of Surrey investigates its impact on children’s outcomes (read the project paper here).

The analysis shows that the free entitlement had positive impacts on mothers’ work patterns, with around 6 more mothers in paid work for every additional 100 funded places. On the other hand, it finds that the policy had relatively small and short-lived benefits for children’s development when assessed across all children. Moreover, there is no strong evidence that the policy benefitted children from disadvantaged backgrounds disproportionally more than other children. This suggests that the policy may not have contributed to close the gap in attainment between children from richer and poorer families, which is also often stated as an aim of ECEC policy in the UK.

These findings are maybe not surprising given the fact that only a small proportion of 3 year olds entered nursery as a result of the policy. Indeed, nearly 40% of 3 year olds in England were already benefiting from free early education at the end of the 1990s, and for about 50%, the policy simply transferred money from the state to parents to pay for early education that they would have used anyway.

Importantly, the research finds that, for children who would not have used early education had it not been free at the point of use, the benefits of the free entitlement for children’s outcomes and mothers’ employment were considerably larger. This suggests that the policy had a lot of deadweight: it changed the use of early education for relatively few families, and, for the others, it transferred money from tax-payers to parents of young children.

As the General Election approaches, various parties have made proposals to extend the free entitlement further (see the 2014 IFS Green Budget for a comprehensive discussion). While it is possible that extensions to the free entitlement could deliver greater benefits for parents and children if the quality of early education or the flexibility of provision was increased, the current evidence does not bear strong support to the proposed extensions. The run-up to the Election will hopefully provide an opportunity for an open debate about the issue and whether there are other possible ways to improve current policy, for example by giving greater focus to the issues of quality and flexibility of provision.

See this article for a discussion of the latest reforms announced by the Coalition Government in March 2014.

This paper by IFS and ISER researchers looks at the  impact of free, universal pre-school education on maternal labour supply.

There is also a companion paper written by researchers at the University of Surrey, ISER and the Institute of Education on the impact of free, universal pre-school education on children's outcomes

The findings and policy implications of these two pieces of research are discussed by all their authors in this briefing note.

Labour have pledged to introduce maximum limits on the levels of fat, salt and sugar in foods marketed substantially to children. Work published by IFS researchers in 2014 looked at the effect of the current policy of voluntary salt reduction targets, and found that the recent observed decline in dietary salt intake was driven entirely by product reformulation by firms.