Real earnings have fallen sharply while numbers in employment have grown

Earnings from employment form the largest component of household income and changes in earnings and employment have been the most important determinants of changing living standards since the 2008­–09 recession.

The labour market has can be characterised by two main trends since the recession. The first is the remarkably robust levels of employment; with unemployment rising relatively little in the recession given the large fall in GDP, followed by surprisingly large increases in employment since then. On the other hand, earnings have risen less quickly than inflation and have consistently grown less fast than expected by independent forecasters such as the Office for Budget Responsibility.

Figure 1. Real average weekly earnings since 2001 [get the data for this graph] 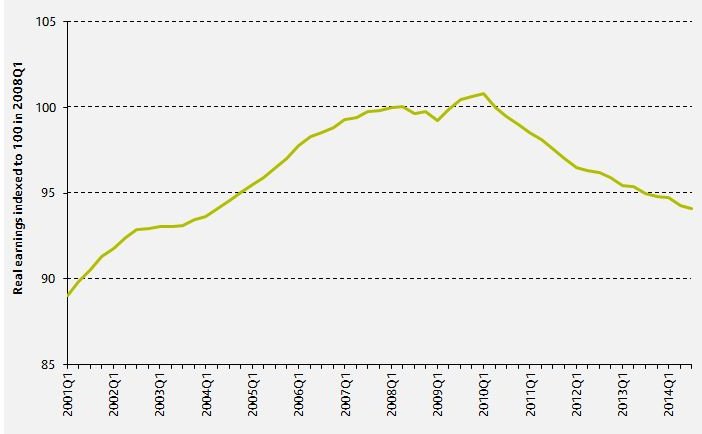 Different parts of the population have faced different changes in the labour market since the recession. On average young adults, particularly those in their 20s, have seen the largest falls in employment and earnings. The public and private sectors have also had diverging trends since the recession. As shown in Figure 2, while public sector employment rose gradually throughout 2008 and 2009, it has since fallen by 430,000. On the other hand, private sector employment fell by 800,000 peak to trough in the recession, but has since more than recovered, rising by almost 2.2 million since early 2010. The pay of private sector workers also fell by more than public sector workers up to 2011, since when pay restraint in the public sector has meant that private sector earnings growth has been faster than that in the public sector. The net result has been that the private / public pay relativity has almost returned to its pre-recession level.

Figure 2. Public and private sector employment since 2008-Q1 [get the data for this graph] 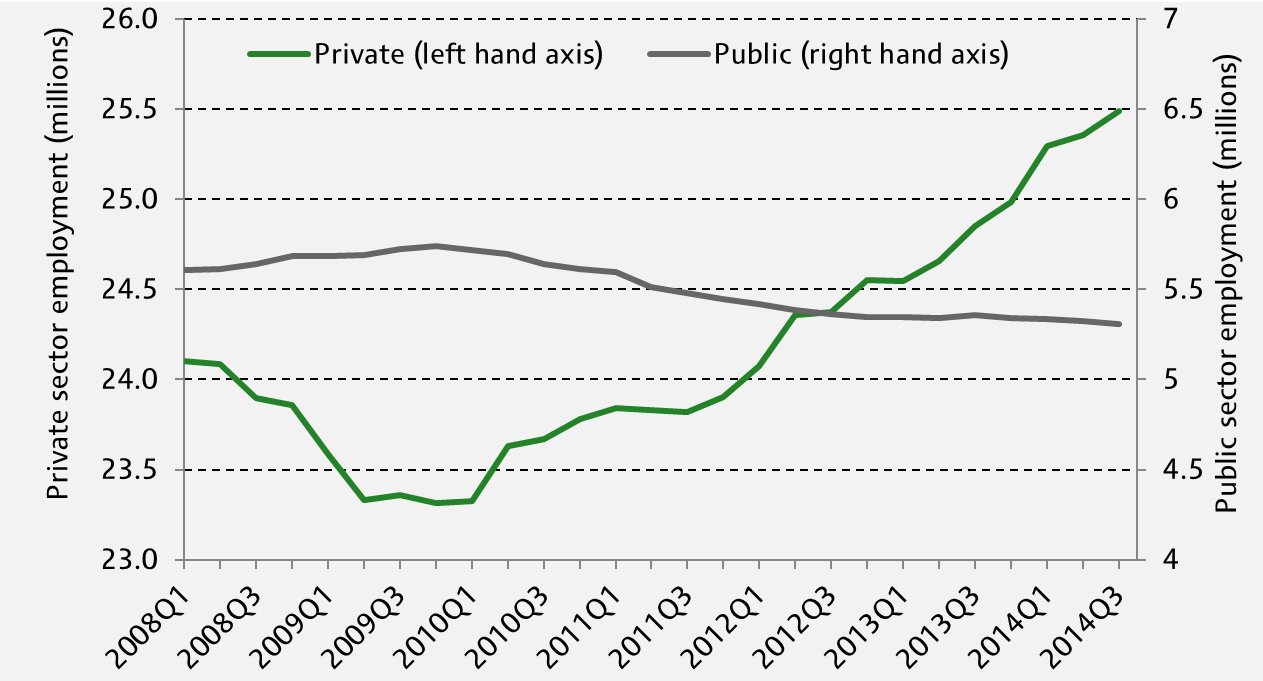 Notes: Public and private sector employment adjusted for the nationalisation (and subsequent privatisations) of financial corporations, privatisation of Royal Mail and the reclassification of FE and Sixth Form colleges in England to the private sector.

This article examined the changes in employment and wages during the recession and compares the changes with previous UK recessions.

This chapter from the IFS Green Budget 2013 examines the reasons why employment growth has been so strong compared to GDP growth; a phenomenon known as “the productivity puzzle.”

Chapter 5 of this report analyses in depth the changes to the labour market outcomes of young adults aged 22-30 and how this has affected their living standards.

This report analyses the increasing employment rates for older people and provides some explanations for recent trends, while this paper shows the effect increasing the state pension age has had on employment of older women.

This briefing note documents changes in the public sector workforce and this report looks in detail at changes in public and private sector pay.

Earnings since the recession

Real wages have fallen by less since the crisis for low earners, driven by the trend since 2011. 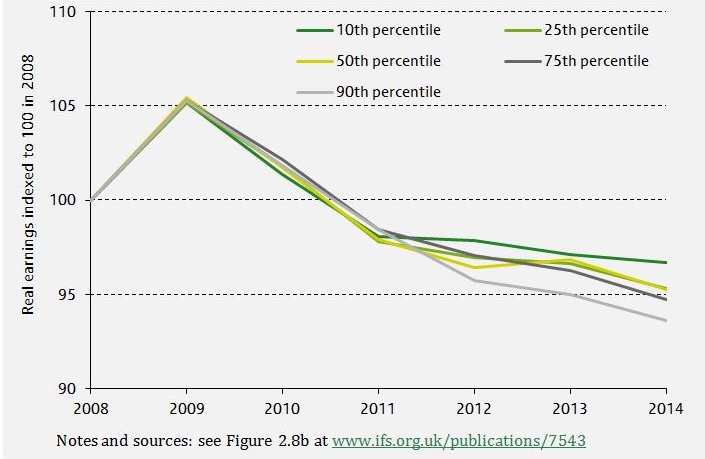 Public sector pay in the UK

In this report, we focus on trends in public sector pay and compare these with what has been happening in the private sector.

Changes to the labour market outcomes of young adults

Chapter 5 of Living Standards, Poverty and Inequality in the UK: 2014 analyses in depth the changes to the labour market outcomes of young adults aged 22-30 and how this has affected their living standards.