Inheritance tax (IHT) applies to (some) wealth that is transferred on or shortly before death. The tax is currently charged at 40%, with each individual receiving an allowance of £325,000. Any unused proportion of this allowance is transferable to a surviving spouse or civil partner, effectively doubling the inheritance tax threshold for many couples. An IFS observation published last year considered the case for radical reform of IHT.

The Conservatives would introduce a new £175,000 per person transferable allowance for main residences when they are passed to children or grandchildren. For many couples this will give a total allowance of £1 million (£325,000 plus £175,000 each). This new allowance will be tapered away from those leaving more than £2 million with the intention that those leaving more than £2.35m will not benefit from the new allowance.

The vast majority of estates (over 90%) are not liable to IHT at the moment and therefore would not benefit. The Conservatives estimate that their policy would be a giveaway of about £1 billion. With around 50,000 estates forecast to pay IHT over the next few years this gives an average (mean) gain per IHT paying estate of around £20,000. The maximum reduction in IHT on a couple’s estate is £140,000 which will go to married couples with estates worth between £1 million and £2 million. Since the children of those with very large estates are disproportionately towards the top of the income distribution the gains from this (and in fact any) IHT cut will also go disproportionately to those towards the top of the income distribution.

Many features of the policy are similar to one analysed in a Treasury document that was leaked to, and published by, the Guardian last month. This estimates that, based on Budget 2014 forecasts, the policy would reduce the proportion of estates liable for IHT from 8% in 2015–16 to just over 6% by the end of the parliament, rather than see it rise to just over 10% under current policy.

As this HMT document argues (para 16, page 9) “there are not strong economic arguments for introducing an inheritance tax exemption specifically related to main residences”. The document lists a number of problems with the policy for example the fact that it would encourage investment in owner-occupied housing rather than other more productive investments and discourage downsizing late in life when that might otherwise be appropriate.

The Conservatives’ proposal would further complicate the IHT system. The Figure below shows the marginal rate of IHT faced by an individual with a home worth £175,000 by the size of their total estate, before and after the change (assuming their estate is to be bequeathed to a child or grandchild). The new effective IHT rate of 60% that kicks in at £2 million is due to the tapering back of the new allowance. Why the IHT rate should go 0%, 40%, 60% and then return to 40% is difficult to justify. A preferable policy would have been simply to increase the existing threshold from £325,000, whereas under current policy it is set to be frozen at this level (which is the level it was at in 2009–10) through to 2017–18.

Inheritance tax schedule for single individual with a home worth £175,000 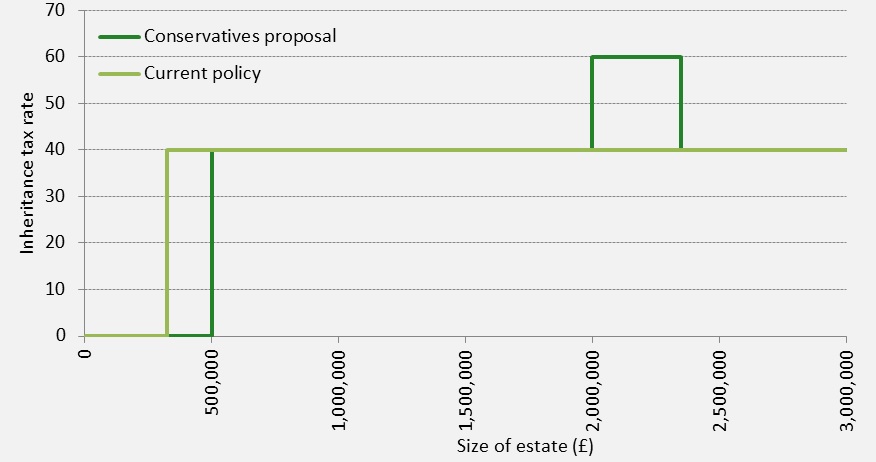 Conservative and Labour proposals to cut pensions tax relief for those with an income above £150,000

The Conservatives and the Labour party have proposed significantly reducing the amount of income tax relief available on the pension contributions of those fortunate enough to have an income in excess of £150,000. This IFS observation argues that both reforms would add considerable complexity to the pensions tax regime and would have the potential to distort savings behaviour and work incentives in a significant and undesirable way.