Coping with the cap?

In 2013 the government introduced a cap on the amount that some working-age families can receive in benefits. Today the Department for Work and Pensions (DWP) published quantitative analysis of the direct impacts of the cap and of how the affected people might have responded. We peer-reviewed this work and offered advice on the methods used, and in this observation we draw out some of the key findings. (A previous observation gave an overview of the benefits cap and commented on the potential rationale – or otherwise – for such a policy.)

The cap, which works by reducing housing benefit awards, was set at £500 per week (except for childless single people, for whom it is £350), and those receiving Working Tax Credit and some claiming disability benefits are exempt. These choices mean that the cap does not affect many people and that the overall fiscal consequences are small. About 27,000 families (less than 1% of working-age families receiving housing benefit) were being capped once the policy was fully rolled out in late 2013, with their benefit income reduced by a total of about £100 million per year. Essentially all the families who receive enough benefit income for the cap to be binding have a large number of children or high rents (and often both).

However, the relatively small number of affected families can lose substantial amounts. Half of those capped in November 2013 lost at least £46 per week as a result. Some recipients lost much more than this, so the mean loss among those capped was much higher still, at £70 per week. Given these large impacts on those affected, it is important to understand how they are responding.

Identifying causal impacts of policies on behaviour is rarely easy, but DWP’s analysis allows us to draw some conclusions about the likely effects. The Figure below illustrates perhaps the most striking evidence. It plots the amount of weekly benefit income (before any cap is applied) against the probability of claiming working tax credit (WTC) a year later, for four groups (`cohorts’) of benefit recipients: those receiving benefits in May of 2010, 2011, 2012 and 2013 (excluding those exempt from the cap, and excluding the single childless who are subject to a different cap level). The May 2012 cohort is the first that we might expect to see changing its behaviour in light of the cap: from May 2012, claimants who looked like they were set to be affected were sent a letter notifying them of this and were offered support through Jobcentre Plus. The cap was then rolled out from April 2013.

The May 2012 and 2013 cohorts were more likely to flow onto WTC than the earlier cohorts at all benefit levels shown – including for recipients below the cap level, which suggests that some of this difference is due to a wider recovery in the economy after 2011 rather than the cap. Crucially though, the divergence between cohorts begins to widen at just around the £500 point at which the cap binds. The divergence grows consistently as one moves to the very highest levels of benefit entitlement, i.e. to those who were hit hardest by the cap. (Note that there are very few claimants at these very high levels of entitlement.)

Figure: Movements onto Working Tax Credit after one year by benefit income (before capping) 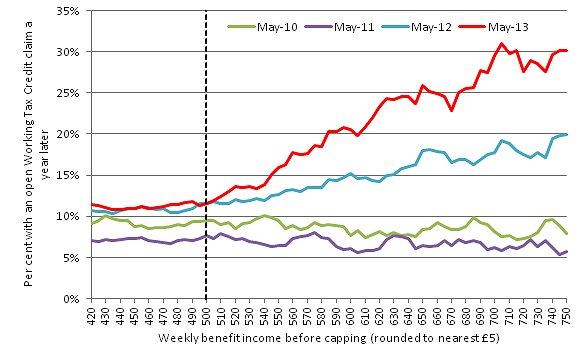 Notes: £500 benefit cap introduced in 2013. Excludes single adults without dependent children, for whom a lower cap level applies (£350 rather than £500 per week). Figures are four-point moving averages.

DWP conducted some more formal econometric analysis of the kinds of patterns documented in the Figure. On average, claimants with benefit income exceeding the impending cap level in the May 2012 cohort – who received warning of the cap and support in dealing with it - were 1.5 percentage points more likely to flow onto WTC within a year than their counterparts just below (within £50 per week of) the cap. This is over and above any gap that would be expected simply because of observed differences in the characteristics of these two groups, such as the number of children that they have. The difference grew to 4.7 percentage points for the May 2013 cohort, after implementation of the cap. These differences did not exist for the earlier May 2010 and May 2011 cohorts (indeed prior to the cap those with higher levels of benefit income were slightly less likely subsequently to move onto WTC). This suggests that these differences provide a reasonable sense of the likely effect of the cap on movements onto WTC.

It is worth bearing in mind the caveat that starting a WTC claim is not the same thing as moving into paid work. Some people may move into work but not work enough hours to be entitled to WTC or not take up the WTC to which they become entitled. On the other hand, some might start a WTC claim when they were in work all along, perhaps because claiming this entitlement is a relatively easy way of exempting oneself from the benefit cap. To the extent that additional moves onto WTC are an accurate indicator of moves into work, these estimates suggest that around 2,000 families who were claiming benefits in May 2013 had someone move into paid work twelve months later in response to the cap. (Note: this estimate is for this cohort, rather than an overall estimate of total additional moves to WTC.)

We might also expect some claimants to move house in response, as many affected claimants are above the cap because they have high rents and hence have a large housing benefit claim. There is evidence of this, but (at least so far) only for the small number of claimants who lost particularly large amounts of benefit income as a result of the cap. For those with benefit entitlement at least £200 above the cap level, 14% of the May 2010 cohort moved within the next year; this had risen to 20% for the May 2013 cohort once the cap was in place. For benefit claimants just under the cap level, the proportion moving house within a year stayed constant at 11% for each of the May 2010, 2011, 2012 and 2013 cohorts.

This evidence helps us to learn about the behaviour of a group of benefit claimants who we previously knew little about. At its Autumn conference, the Conservative Party suggested lowering the benefits cap by approximately a further £60 per week (to about £440 per week). On the basis of the analysis published today, it would be reasonable to expect this to result in some of the affected claimants moving into work, but few moving house – the maximum possible loss of benefit income, from this additional hypothetical cut, would be £60 per week, and the current cap seems to have increased house moves only among those who lost substantially more than that.

Nevertheless, there is still much we do not know. There are various other possible responses to this reform, including cutting back on spending, running down savings (or building up debts) or getting help from family or friends. Analysis of benefits data cannot tell us about this (although DWP have also conducted surveys of, and in-depth interviews with, those subject to the cap and these provide some information on other potential responses). What the quantitative analysis does tell us is that the large majority of affected claimants responded neither by moving into work nor by moving house. For this majority, it remains an open question as to how they adjusted to what were, in many cases, very large reductions in their income.